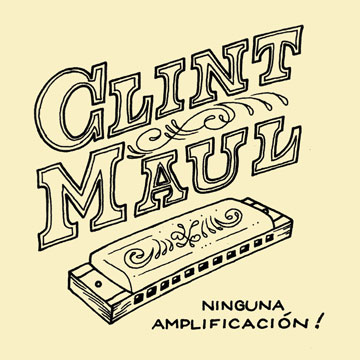 A man and his guitar. It doesn't get much simpler than that. Alright, a harmonica can't hurt either. Clint Maul writes songs for summer night bonfire field parties. Songs to sing on lazy days while tubing down the river with a six-pack of your favorite beverage in tow behind. Songs that are best witnessed live in small corner bars, backyard barbecues, or front porch chill-out sessions.

You may recognize Clint from past hardcore/punk bands such as Bladecrasher and Bombs Away, so you know the guy can write a song, but these days Clint is going unplugged for the most part and bringing us some of the best southern-influenced pop/rock we've heard in a long time. Part Replacements, part Lemonheads, part Jawbreaker, and part Merle Haggard...this stuff is damn good. If you're like us and you love bands like Superchunk and the Doughboys as much as you like Drag the River and Lucero, then you'll have no problem digging this EP right away.

This EP marks the first in a series of 7"s we'll be doing with Clint, all limited to 500. Some acoustic and some amped up. If you've seen him play recently than you should be as excited as we are for what's to come.